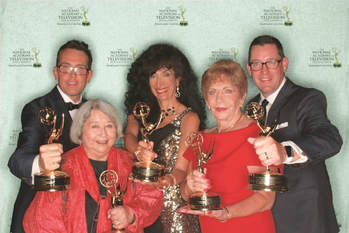 This is Lisa's 2nd Emmy® WIN and her 4th Emmy® nomination!! This is a WIN for the entire team that created this video for the Colorado Women's Hall of Fame and Rocky Mountain PBS, including (left to right) Bill Ranshaw (film maker with Enchanted Road Productions), Becky Martinez (script writer), Lisa Downing (composer of original piano score), Betty Heid (producer) and Rick Higgins (film maker, also with Enchanted Road Productions)
See the team reaction as our award is announced and the amazing documentary that won the 2018 Emmy® Award for my Musical Composition/Arrangements!
Dana Crawford was described in a 1990 Denver Post article as both an historic preservationist and a developer. Larimer Square in downtown Denver stands as one of her premier accomplishments, a wedding of preservation and development in lower downtown (LoDo). Other projects include Union Station, various restaurants, loft and office complexes, the Ice House, Coors Field, and the renovated Oxford Hotel. Her research on lower downtown properties and on development has thrust her to the forefront as a speaker and consultant to over 50 cities on housing in historic buildings and on mixed-use development. As a civic and business leader for over three decades, she has received many awards and much acclaim. A group of historic preservation organizations established the Dana Crawford Award for Outstanding Achievement in Historic Preservation. Crawford is a founding member of Historic Denver, Inc., as well as Lower Downtown District, Inc. danacrawford.net

Today, Crawford is part of a consortium of Denver movers and shakers turning forsaken Union Station into a transit hub, hotel and cultural gathering place. Here is a recent interview where she discusses the Union Station project.