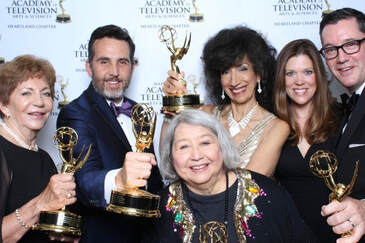 This is Lisa's 3rd Emmy® WIN and her 6th Emmy® nomination!! This is a WIN for the entire team that created this video for the Colorado Women's Hall of Fame and Rocky Mountain PBS, including (left to right) Betty Heid (producer), Bill Ranshaw (film maker with Enchanted Road Productions), Becky Martinez (script writer), Lisa Downing (composer of original piano score),  Lesley Strong Higgins and Rick Higgins (film maker, also with Enchanted Road Productions)
Crowned Miss America in 1958, Marilyn Van Derbur Atler became one of the most popular women to hold the title. After serving in that capacity for a year, she returned to the University of Colorado and graduated with Phi Beta Kappa honors.

A Denver native, Marilyn Van Derbur Atler has become synonymous with public speaking. After her graduation from CU, Van Derbur Atler was hired by AT&T as the only spokeswoman for their television commercial on the “Bell Telephone Hour.” She has been the host of 23 network television specials on CBS and NBC, and is is great demand as a keynote speaker at conventions.

For sixteen years Van Derbur Atler was General Motor’s only woman guest lecturer. She has spoken to thousands of business and education groups all over the world and has produced eight 30-minute motivational films which are being shown throughout North America at business and civic meetings and conventions.
As a result of being sexually violated by her socially prominent father from age 5 to age 18, her life shut down at age 45, and for six long years Van Derbur Atler struggled to overcome the memories and feelings that overwhelmed her. In 1989 she asked the Kempe National Center in Denver to begin an adult survivor program to help other men and women who were just beginning their healing process. Her family contributed $260,000 to establish the program which would also concentrate on research.

During the past five years, Van Derbur Atler has spoken in 160 cities and personally answered over 7,000 letters from men and women whose adult lives have been traumatized by childhood sexual violations. In 1993 she co-founded two national not-for-profit organizations based in Washington, DC dedicated to public education and awareness to strengthen the laws protecting adult survivors and child victims, and to stopping the sexual violations of children.

Van Derbur Atler has received national awards from the Secretary of Health and Human Services for Exceptional Achievement in Public Service, the Distinguished Community Service Award from the Anti-Defamation League and the Individual Award from CHILDHELP. Van Derbur has been named “Outstanding Woman Speaker in America.” She has one daughter, Jennifer.