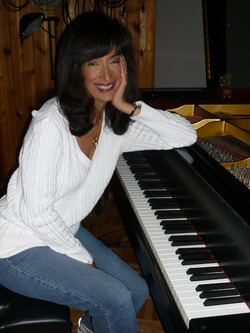 LISA DOWNING a three-time Emmy® Award WINNER, a 7 time Emmy® Award nominee, achieved #5 on the Billboard Charts for New Age Album, and is a multiple award winning, international composer, concert performer, and recording artist who is re-defining the genre of solo piano. She performs world-wide with Grammy Award winning musicians such as Liz Story, David Lanz, Suzanne Ciani, and Peter Kater. Her performances include the "International Pianists of the World" series in Spain, the “Concierto Internacional de Piano” series in Argentina, performances in Germany, as well as concerts across the United States.

Her CDs have won multiple awards including the ZMR Holiday Album of the year. Lisa's album "A Delicate Balance" was also considered for Grammy nomination and ranked in the top 5 Albums for worldwide airplay in it's genre.

Her newest CD, "The Wisdom of My Shadow” is a collection of Lisa’s rare and intricately sophisticated musical reflections upon feminine power and the shadow-self within us all. Lisa’s musical creations paint a vastly imaginative landscape of powerful and mysterious energies drawn from her seemingly inexhaustible palate of musical creation.

Ms. Downing’s collection of original solo piano compositions are fiercely impassioned, while the meaning of each piece remains clear and accessible. Her works might be classified as New Age, but they more accurately belong in a yet unnamed genre that would be a fusion of multiple musical categories. Her unique style could be compared with Liz Story, Peter Kater, David Lanz or George Winston, but experiencing her creations will certainly draw you into uncharted musical territories.

Lisa believes that there is a “Universal Source” of music. This “Source” is streaming at multiple levels through endless and unseen channels that are available to anyone. The only thing required to become aware of this abundant stream is to be still and listen. Lisa simply emulates the music she can hear from the “Source,” using her skills at the piano.